Using the Parallaxic Praxis Model, the researchers each develop an artefact series collected data. In a facilitated creativity propulsion activity, the artefacts are used in a layer of knowledge generation through a dialogic analysis called the Cathechization Process.
Art by Lakehead Team:  E. De Sommer-Dennis & M. O'Reilly, T. Orasi & P. Sameshima,
Project: Teacher Creativity in VR Spaces
As part of a research project on teacher creativity, a video was created from works made using Google Tilt Brush software. Engaging with the possibilities of this software has allowed the Lakehead team the opportunity to both imagine and inhabit the space where new understandings of the data have been created.

Expanding the literacy of creativity across disciplines and into virtual realms, the modality of these virtual paintings represents a new way of thinking, being and entering the research.

Using the data from a Teacher Creativity project and Parallaxic Praxis as a methodology to inform our making and questioning of the data, the themes explored in this series of virtual makings include:

- The industrialization of education and the inherent tensions between efficiency and creativity;
- Path dependency and the redirecting of life trajectories that form selfhood;
- Playing/tinkering and ephemerality;
- Permission for creativity and the growing of agency in new ways through the creative process;
​- The “celebrations of leaving” in education, which extend to the lives lives of teachers, students, and in ways of thinking about
​   creativity and education;
- Trace as part of creative journeys; and;
- The social value of creativity.

The team would like to express their sincere thanks to Valerie Gibbons and Garth Galvin (Lakehead University Chancellor Patterson Library Staff) for their gracious support and assistance with the use of 3D modelling and Google Tilt Brush platforms.
​
Matthew O'Reilly's Translations
Click here to see more of Matt's work

Agony in the Garden Series: Ministering in the Space of Ma I, II, III, 2019 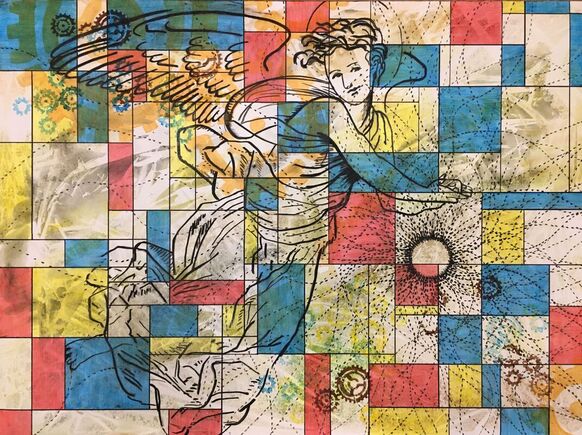